Maksim Berezovsky. Artem Vedel
With many tribulations belong to us
enter into the Kingdom of God
/ Acts. 14:22.
Beloved! Don’t avoid fiery temptations
that is referred for you to the test,
like a strange adventure for you
as you participate in the sufferings of Christ
/ 1 Pet. 4:12-13. 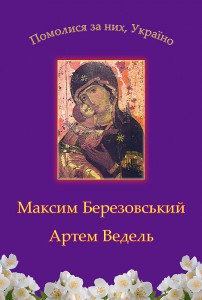 First of all, because almost all of our outstanding musicians, artists were not secular and spiritual. And even they wrote secular works that skill and substance are not inferior world“s masterpieces, this work was a sideline for them. They created a spiritual layer of choral art, unsurpassed in beauty and perfection. This achievement, of course — the fruit of over a thousand years of Christian culture in largest (by number of churches and parishes) Orthodox country. Ukrainian genius were descendants of most singing nation that by the number of songs and carols piping exceeds all peoples of the world.

Unique is also the fact that throughout the history Ukrainian culture was eradicated, and especially brutal — by colonizers of last centuries. Our artists were or forced to serve the oppressor or killed, or their works were destroyed, annexed. Ukrainian art was doomed to death, but, reborn in prayer, it became immortal, rose from the ashes, hacked through the asphalt. What more of our torches were killed, the more Ukraine had prayer that it will not ever die.

They were given us by Lord to fill the whole earth with beauty. They have enriched our nation by invaluable treasures, and with what can we pay our unpaid debt if not by prayer and love?..

On the cover — Vyshgorod Holy Virgin.

This most holy of Kievan Rus, donated in 1131 to holy prince Mstislav, was in glorious Vyshgorod — private domain of Apostle-equal Princess Olga, the city where saints passion endurants Boris and Gleb are buried.

1155, icon was cunningly stolen by Prince Andrew Bogolyubsky, son of Yuri Dolgoruky, and taken away in Vladimir-on-Klyazma (whence comes the second name and icon — Volodimirska). 1395, the sanctuary was taken to Moscow.

In March 1169, on the second week of Lent, Suzdal army led by «god-loving» Prince Andrew crashed in Kyiv. «And they spoiled the whole city for two days, and Mount Podollya and monasteries, and Sophia, and Desyatinna Mother of God… Churches burned, Christians were killed, and other bound, women were in captivity… And took a lot of property, churches were bald of icons and books, and vestments. Bells were put off and brought in the north country… even lighted Pechersk Monastery of the Holy Mother of God… And was in Kiev groans and anguish, inconsolate grief» /Annals of Rus by Ipatsky list/.