«Ukrainian Mozart» — Maksim Sozontovich Berezovsky — born October 16, 1745 in poor Cossack family in Hlukhiv, then the Hetman capital, which had unique music school in the whole Russian Empire1. Probably, the initial future genius got there. In the famous St.Nicholas church and the beautiful Chapel last Hetman Kyril Razumovsky his beautiful voice was heard (this can only guess — such mystery covered the details of the fate of the artist: his life was not allowed to investigate more than two centuries).

Unknown as Maksim got to Kyiv-Mohyla Academy, but known that there he began to write choral concerts. Exceptional musical talent of the boy soon attracted the attention, and in his 14 years, from sixth grade of Academy, he was taken in St. Petersburg. Maksim became a soloist of the court singers choir. It’s director at that time was a prominent Ukrainian musician Marco Pivtoratsky, he is taught art song by Italian conductor Francesco Zoppis.

In his 15 years young musician wrote a series of choral concerts that not only get rave reviews by professionals but also widely recognized (some of the works of this period is still preserved and impress modern listeners with brilliant professionalism and perfection). Simultaneously, talented composer becomes the first opera actor, but not stopping to create more and new musical masterpieces.

Loud glory didn’t waste soul of youth, which clearly shows his genius written choral concert «Don’t reject me in my eld» — one of the best works of world sacred music. This divine prayer, the deepest, weeping penitent of soul is incredible for 17-19-year-old boy of lucky fate gives us the soul of man that faces all his heart to heaven, not to earthly treasures. In all works of Berezovsky is heard this amazing deep prayer, inseparable uniqueness of music and words, unknown to the vast majority of that time, especially the Italian composers who wrote for the Russian orthodox church. Berezovsky created new type of classical choral concert: his music combines refined Italian craftsmanship with byzantine moderation and purely Ukrainian heartfelt melodies, generous beauty and spirituality.

1769 (unknown, by whose efforts and assistance), first among all Russian musicians, Berezovsky was sent in Bologna, Italy, to improve his composer“s art. His teacher is renowned lecturer, art critic, pride of the Bologna Academy, an expert of ancient musical traditions padre Giovanni Battista Martini. Probably, words of this great teacher were dedicated to Berezovsky: «There are special and rare talents who have suffered great damage from the restrictions of certain methods and mentor, because it would prevent them achieve the perfection which could not achieve their mentors themselves. After several years of training padre Martini recommended to initiate young Ukrainian in Academy. Exam appointed on May 15, 1771.

Most famous musicians in Europe then sought to get the title of the Bologna Academy member, but a few got it (the year before Bologna academician was Wolfgang Amadeus Mozart). Examinations were marked by great complexity: it was necessary to write a perfect work for a short time, following strict rules of musical science. The jury of 15 judges decide by secret ballot, by casting in the box one of two balls: black or white. Music of young Maksim amazed the jury: after listening to his works 15 white balls were founded in the box.

Name of Berezovsky was engraved in gold letters on a marble board of Bologna Academy after Mozart’s name2 and his portrait, as belonged, was painted on the wall of the church of San Giacomo. If this portrait will be restored, it would be only plausible depiction of the composer…

Berezovsky made up exam at the Academy as a foreign composer and had, by agreement, be a conductor at home. And Italian music lovers union chose him as his conductor. Composer wrote series of choral works that have received publicity in the press, and most of them did not reach us. During this period, he created not only concerts, sonatas and symphonies, but a truly Biblical inspiration music, the prayers of the Divine Liturgy (probably these, incomprehensible to Italians, rooted in age-old Orthodox tradition prayer songs that effused from the composer’s heart best reflected needs of his spirit, most saturated and becalmed him in exile). Musician’s triumph in Italy was his opera «Demophonos» staged in 1774 in Livorno. Sophisticated and jaded with paramount music, Italians were delighted with the ingenious euphony and unparalleled beauty of this work. Many Academies of Europe elected Berezovsky as its honorary member.

However, the famous composer wanted to return home. And there was no wonder: all his works, vivified with Ukrainian deep piety, breathed the motives of Ukrainian songs, heroic glory of his native land, holy peace… Perhaps, at the height of glory Berezovsky got an idea to establish an academy in Ukraine such as in Bologna. It was brilliant and very real prospect for Ukraine music, especially — with Bologna young scholar, full of desire to act, work, create! It is not surprising that the very year of his triumphal opera productions Ukrainian genius left Italy, he returned to Petersburg (and probably having used considerable effort), got a promise from Count Potyomkin to contribute before Empress for establishment of Ukrainian Academy of music. Before this Count promised Berezovsky the post of academy director, and the academy was planned to establish in Kremenchuk.

But this dream of composer was not realized. And it could not be realized. Russian throne was already occupied with completely indifferent to music Empress Catherine II, who in addition to all hated distinctive Ukraine more than other autocrats, consistently destroying in it that Peter I failed to destroy; plundered Ukrainian Orthodoxy, tortured many Ukrainian saints, eradicated Zaporozhye Cossack army (Sich), which for centuries defended the faith and will of Ukraine, protected the people… Then Petersburg was invaded with hired foreigners and suck favorites, adulators, ready to destroy each who stand in the way of their careers. Defenceless genius was in the environment of cruel enviers, powerful, cunning, wicked men, secret and overt enemies, which were entertaining with disrespect and humiliation of the famous artist. Disqualified to hold position relevant to his skills and rank, he hardly got a job as a freelance singer in the Chapel courtier singers: he substituted for sick and missing singers. He did not give any chance to print or perform any of his work. But Berezovsky did not cease to do and worked very effectively. Surprisingly, even in this worst period his music is full of extraordinary, irresistible light. It still sometimes hear the grief, even anguish, pain and mourning, but there was never despair! And this music has ethereal beauty, modesty and generosity and tells us about of the author more than all biographies.

Some of his spiritual works composer sent to fellow-musicians, however, probably, they, scattered and disenfranchised, could not help him in any shape. There is information that in recent years composer sounded serious theme of deceived, offended holy Ukraine. It is clear that in the conditions of that time such works were condemned to death.

Apparently, some time Berezovsky hoped that the academy in Ukraine still be created and subsequently made sure in despair of these expectations. Faced at every turn with indifference and arbitrariness of government officials, proved with three-year ordeal to extreme poverty, deprived of opportunities to get back home, dejected by destruction of Sich, composer was seriously ill.

Extremely superficial are widespread allegations about strip of «failures» of Berezovsky in St. Petersburg. This was not in the «failures», and that genius Ukrainian artist was morally and physically killed…

Is true or not the official version of Berezovsky death, which March 24, 1777 «in fit of hypochondria slit his throat», it is hard to say. Some say that being bad with fever without medicine, without help, half-conscious, he committed that irreparable disaster. It was rumored that he was killed (too awkward is such way of suicide). Strange also was, how carefully was withheld the name of this famous genius — seemingly proud of the empire — and everything connected with him (exactly as after the crime some try to «strike out» the names of murdered). And seems like truth version that immediately after the death of the great composer Empress gave secret orders to burn all works of the man found in his poor apartment to erase the name of the creator from the pages of history. The only thorough evidence remained, that there was no means to bury Maksim Berezovsky…

We ask all Christians who will read these lines, remember God’s servant Maksim in their personal prayers3. One Lord knows what was going on in his soul, his heart in those last years and days. Whether he retained confidence in the Lord in the test that God gives to each according to his strength of mind, strength of heart, or he was disappointed? Is he holy martyr or defeated in the spiritual battle deadly sinner for whom not even allowed to pray in church? Maybe he did not bear his cross to Calvary, however, if each of us will assume at least a part of his burden, the cross will be born. And even the Lord does not incline us to divine mercy prayer with beautiful, truly pious, immortal hymns of His chosen? 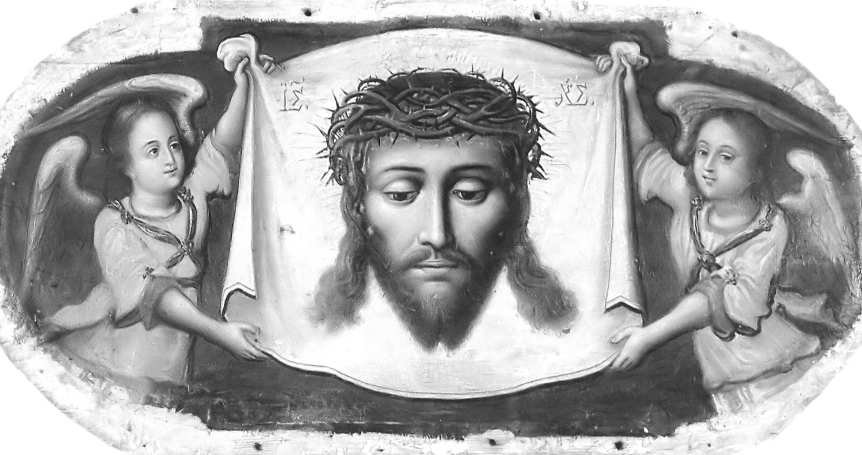 Near forty major works are known only by name. 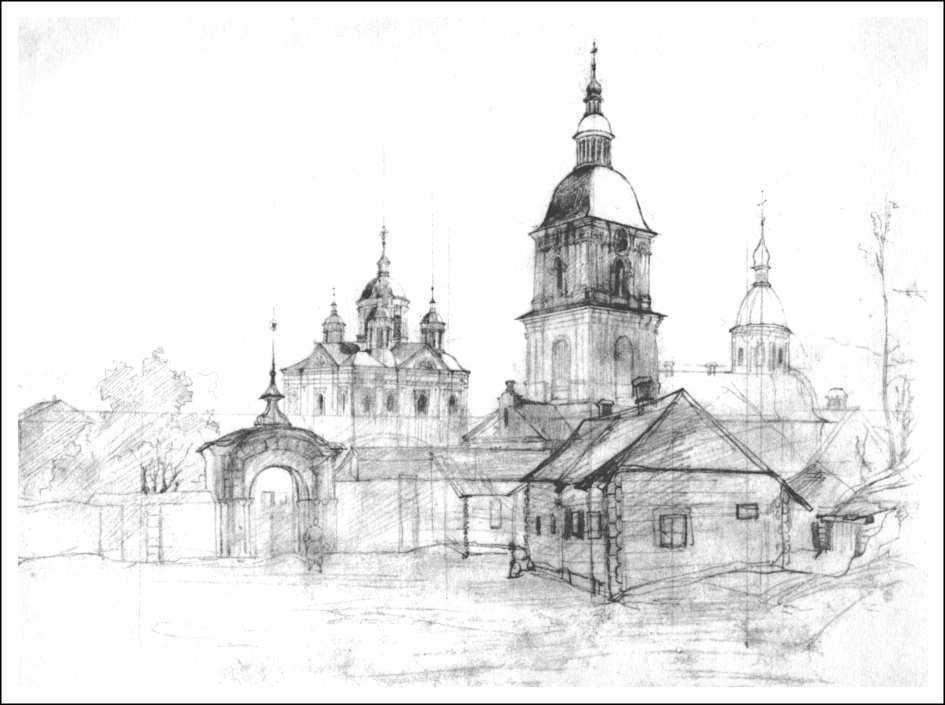 Kyiv Mezhyhirsky Transfiguration Monastery was founded near Vishgorod 988. In XVII–XVIII centuries became the spiritual center of Sich, a stronghold of Orthodoxy. Here took tonsure students of the Academy of Kyiv-Bratsk Monastery, among them — St. Joasaph (Gorlenko), Belgorod Thaumaturgy.

«The year before I was in Ukraine — at Mezhyhorsky Saviour. And I was on Khortitsa and everywhere was and wept … » — from the letter of T. Shevchenko to Kukharenko, 1844. 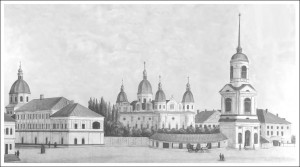 Kyiv-Mohyla Academy in spiritual Bratsk Monastery was a center of Orthodox spiritual life, and from 1658 — the first university in Eastern Europe. Graduates of the Academy founded all religious seminaries, all grammar school, high school and collegiums in Russia, launched poetry, drama, basic philosophy, medicine, teaching and translation work, learning foreign languages. In the XVIII century every third doctor of the Russian Empire, and all without exception bishops and missionaries were inmates of the Kiev Academy. Cultural influence of spiritual citadel, founded by St. Peter (Mohyla) — author of world famous Orthodox catechism — has spread to many countries. For two centuries (until the destruction of Academy by decree of Russian synod in 1817) it was a source of education, the best traditions of education, charity, selfless work. Kyiv-Mohyla Academy gave the world great, glorious by immortality and miracles saints: Feodosy (of Uglich), Demetrius (Tuptalo) — author of «Lives of Saints», Arseniy (Matsiyevych), Innocent (Kulchitsky), John (Maximovich), Joasaph (Gorlenko), Paul (Konyushkevych), Sophron (Kryshtalevsky), Paisios (Velychkovsky) and other saints; distinguished professors of hierarchy: Innocent (Gisel), Yoanyky (Halyatovsky), Lazarus (Baranovych), Stephen (Jaworski), Raphael (Zaborovsky), George (Konys“ky), philosopher Grygory Skovoroda and many other leaders of the church, science, culture, art. Among them — M. Lomonosov.4